Covid-19 Live Updates: Europe, Which Thought It Had the Virus Tamed, Faces a Resurgence

Here’s what you need to know:

London will join other big cities in Europe, including Paris and Berlin, in tightening restrictions to stem a rapidly rising second wave of coronavirus cases in Europe.

A ban on people mixing indoors in the British capital will begin after midnight on Friday as London moves up into tier 2 — “high alert” level — in England’s new three-level virus restriction system, the care minister, Helen Whately, told London lawmakers in a call on Thursday. People will also be discouraged from using public transportation.

Rapidly increasing caseloads across Europe are raising grave fears of another surge in coronavirus cases as winter approaches and people around the world chafe under pandemic restrictions that impede their daily lives — and their livelihoods.

Officials are scrambling to devise targeted restrictions, in the hope of avoiding the blanket lockdowns that paralyzed economic activity in the spring.

But that may be impossible.

On Wednesday, President Emmanuel Macron of France announced that, starting on Saturday, the authorities would impose a curfew from 9 p.m. to 6 a.m. in the Paris region and around eight other major cities. The curfews will run for at least four weeks.

The measure is part of a renewed state of emergency that allows the national government to restrict public gatherings and movement countrywide. It was first declared in the spring but had ended in July.

“We need this — and if we don’t want to take harsher measures in 15 days, or three weeks, or one month, we have to do it and comply with it,” Mr. Macron said.

The measure is to be applied in the regions of Paris, Grenoble, Lille, Lyon, Aix-en-Provence and Marseille, Montpellier, Rouen, St.-Etienne and Toulouse, affecting roughly 18 million residents.

In London, the mayor, Sadiq Khan, said on Thursday that the city was at a “critical moment” and that he expected the government to announce the new restrictions soon.

In Germany on Wednesday, Chancellor Angela Merkel and state governors agreed to nationwide restrictions on social gatherings and domestic travel, in response to a rise in infections. Germany recorded a record 6,638 new cases on Wednesday.

“I am convinced that what we do — and what we don’t do — in these coming days and weeks will be decisive in how we get through this pandemic,” Ms. Merkel at a news conference.

In 10 days, she said, the authorities will discuss if stricter guidelines are needed.

There is also growing concern about the damage a second virus wave could sow in the formerly Communist countries of Central Europe, many of which have weak health care systems facing critical shortages of doctors and nurses and inadequate testing programs. In the Czech Republic, virus deaths reached 2.9 per 100,000 people for the seven days ending Tuesday.

And in Russia, which reported its largest daily increase in infections on Wednesday, President Vladimir V. Putin sought refuge from the torrent of bad news by announcing that the Russian government had approved a second vaccine.

The number of new coronavirus cases in the United States is surging once again after growth slowed in late summer. While the geography of the pandemic is now shifting to the Midwest and to more rural areas, cases are trending upward in most states, many of which are setting weekly records for new cases.

New cases per day in the United States

New cases per day in the United States

New cases per day in the U.S. 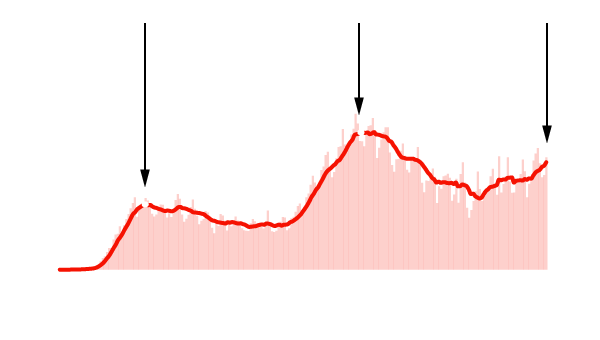 in the United States

Taken alone, case counts are an imperfect measure of the pandemic’s severity, and it is difficult to compare the current numbers with earlier points in the U.S. outbreak when testing was less widespread. But other critical measures are showing a resurgence, too. And the continuing spread of cases to new areas of the country suggests the outbreak is far from over.

“We are headed in the wrong direction, and that’s reflected not only in the number of new cases but also in test positivity and the number of hospitalizations,” said Caitlin Rivers, an epidemiologist at Johns Hopkins University. “Together, I think these three indicators give a very clear picture that we are seeing increased transmission in communities across the country.”

The rise since mid-September has been especially profound in the Midwest and Mountain West, where hospitals are filling up and rural areas are seeing staggering outbreaks. The regions are home to almost all of the metro areas with the country’s worst outbreaks right now.

“We are starting from a much higher plateau than we were before the summer wave,” Dr. Rivers said. “It concerns me that we might see even more cases during the next peak than we did during the summer.”

On the afternoon of Feb. 24, President Trump declared on Twitter that the coronavirus was “very much under control” in the United States, but hours earlier, senior members of the president’s economic team, privately addressing board members of the conservative Hoover Institution, were less confident.

Tomas J. Philipson, a senior economic adviser to the president, told the group he could not yet estimate the effects of the virus on the American economy. To some in the group, the implication was that an outbreak could prove worse than Mr. Philipson and other Trump administration advisers were signaling in public at the time.

The next day, board members — many of them Republican donors — got another taste of government uncertainty from Larry Kudlow, the director of the National Economic Council. Hours after he had boasted on CNBC that the virus was contained in the United States and “it’s pretty close to airtight,” Mr. Kudlow delivered a more ambiguous private message. He asserted that the virus was “contained in the U.S., to date, but now we just don’t know,” according to a document describing the sessions obtained by The New York Times.

The document, written by a hedge fund consultant who attended the three-day gathering of Hoover’s board, was stark. “What struck me,” the consultant wrote, was that nearly every official he heard from raised the virus “as a point of concern, totally unprovoked.”

The consultant’s assessment quickly spread through parts of the investment world. U.S. stocks were already spiraling because of a warning from a federal public health official that the virus was likely to spread, but traders spotted the immediate significance: The president’s aides appeared to be giving wealthy party donors an early warning of a potentially impactful contagion at a time when Mr. Trump was publicly insisting that the threat was nonexistent.

Interviews with eight people who either received copies of the memo or were briefed on aspects of it as it spread among investors in New York and elsewhere provide a glimpse of how elite traders had access to information from the administration that helped them gain financial advantage during a chaotic three days when global markets were teetering.

To many of the investors who received or heard about the memo, it was the first significant sign of skepticism among Trump administration officials about their ability to contain the virus. It also provided a hint of the fallout that was to come, said one major investor who was briefed on it: the upending of daily life for the entire country.

“Short everything,” was the reaction of the investor, using the Wall Street term for betting on the idea that the stock prices of companies would soon fall.

President Trump might want to wait a bit before he puts on a Superman T-shirt.

After recovering from Covid-19, the president declared that he was now immune to the disease caused by the coronavirus, and was said to have talked about wearing a superhero shirt under his dress shirt.

But if Mr. Trump is in fact now immune to the virus, he may not remain so, scientists warn. That’s because the treatment he received may have prevented his body from making the antibodies necessary for long-term protection.

The experimental monoclonal antibodies Mr. Trump was given are synthetic, and they will most likely wane in a matter of weeks. Indeed, unless they are replenished, Mr. Trump may be left more susceptible to the virus than most patients who had Covid-19 and recovered, several experts warned.

There is another wrinkle for the president.

In addition to the monoclonal antibodies he was given, Mr. Trump also received steroid treatment. That suppresses the body’s natural immune response — including the production of antibodies of its own.

“He may be not protected the second time around, especially because he didn’t develop his own antibodies,” said Akiko Iwasaki, an immunologist at Yale University.

Americans torn between taking a vacation and avoiding the coronavirus, surveys find